Eliud Kipchoge was born on the 5th of November 1984 in Kapsisiywa, Nandi District, Kenya. He rose to fame in 2003, when he won the junior race at the IAAF World Cross Country Championships, broke 5000m junior world record and becoming the world champion at the 2003 World Championships in Athletics. He had an okay track record over  5000m ¹ as you can see below.

Is he the greatest of our time or of all time? The features that we will be looking at are:

In 2012 he moved to road racing gradually. In 2013 he made his marathon debut in the Hamburg marathon where he set a new course record: 2:05:30. From then he has won 9 of the 10 marathons that he has competed in. Below is the timeline showing the marathons and the results: 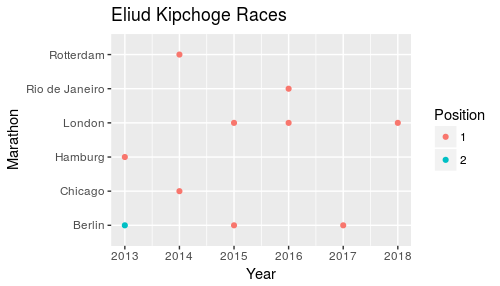 What I can point out out from the figure above is consistency. He runs two major marathons each year. In 2017, which might seem to be the exception, is when he attempted the sub-2 hour mark in Monza, Italy. Another fact that we can draw from the above figure is, after 2014, he has only been participating in the Berlin and London marathons, again consistency. Finally, let as look at his times. There are other athletes who are faster than he is. However, the key again is consistency. He does not have outrageous fast races followed by slow races, he is between 2.03 and 2.05 throughout his career. An outlier will be the Olympic games which we can understand because of the weather conditions.

He has only broke two records, which were the course record in Hamburg and London. Based on his past performances, he is not someone who you can bet will break the 2 hour barrier in a major marathon. Which begs the question: is he the greatest of all time because of his winning? Paul Tergat has the joint longest world record reign so far; from 2003-2007, 2:04:55. He did this in Berlin.  Haile Gebrselassie won the Berlin marathon 4 consecutive times and in the process broke the world record twice. He is considered the King of Berlin. Wilson Kipsang is currently the second world fastest marathon athlete. He has run the most under 2hr 4min races. Finally, Denis Kimetto is the fastest marathon athlete with  2:02:57, which is still holding since 2014.

A key thing to note is that the above athletes were prominent in the Berlin marathon which is known to be relatively easier than the London marathon where Kipchoge has his personal best of 2:03:05. The question here is can you achieve  consistency while clocking world fast times and at the same time winning the races? From the figure below, its hard. One has an incredible race but they have difficulties replicating the same the following year.

The athletes preferred the Berlin and London race. Wilson and Paul ran the New York City marathon thrice and only won it once. As mentioned earlier, whats interesting about Eliud is that he did not run his fastest race in Berlin like the others. The four athletes have broken the world record in Berlin. This is the best bet for the sub-2 hour mark race to be ran.

Haile Gebrselassie had the longest career so far. This was after his successfull track career. He had a four year purple patch where managed to break the record 2 and won four consecutive Berlin titles. He is a competitor to Eliud in terms of the purple patch, his is 5 years so far. He has done this in a six year career so far. The other athletes have a patch of less than 3 years.

Given all that, my opinion that we have to applaud Eliud’s career so far. However that record is important before lauding him as the greatest of our time if not of all time. It will also be interesting to revist this after Mo Farah and kenenisa Bekele settle into the road races.

Data enthusiast who looks at ways to integrate machine learning to our day to day life. Mostly interested with the intersection of AI and Sports View all posts by Yvonne Wambui