Building a startup is not easy. It’s an attitude and a mindset. Startups fail because founders don’t know what makes a business successful. Business failure is not something you want to think about. I would say around one fifth startup companies fail in the first year while most employer engagements fail in the fifth year.  only about one third survive five years but most companies that go out of business make similar mistakes. Here is the list of my takeaways.

Founders fail because they cannot admit when they are wrong. What’s risky is following a founder that has never led a team before, has no track record for success, and has nothing but a vague idea and a little bit of runway. A startup is basically a group of people in a room working on an idea. When the idea fails, the room has nothing to the failure of the idea, but the people in the room. The founders lack the self-awareness to do the following things:

They don’t know what they don’t know, and they make decisions about things they know nothing about, instead of seeking a mentor within certain realms of expertise. An inevitable fact while building a startup is that most founders cannot manage their emotional turmoil. They take their emotions to team members and people around them. Most of the times, they think that raising money is the solution to their problems. This makes them try hard to prove that they know rather than listen and learn.

most startup founders get stuck to their original idea and fail to pivot. This makes them put more effort to marketing and PR to something they do not even know whether it works. This means that the founders are tied to their egos and can try whatever it means to prove to the world that their idea works. Startup companies spend a lot of money trying to make the original broken idea work, rather than admit they didn’t have it all figured out and keep pivoting in a better direction.

That’s the truth and founders fail because they can’t admit when they’re wrong. They fail themselves long before. I would say that there is certainly no survivorship bias here but many relevant lessons for anyone in the entrepreneurial ecosystem. From lack of product-market fit to disharmony on the team, CB insights breaks down the top 20 reasons for startup failure by analyzing 101 startup failure post-postmortems as summarized below: 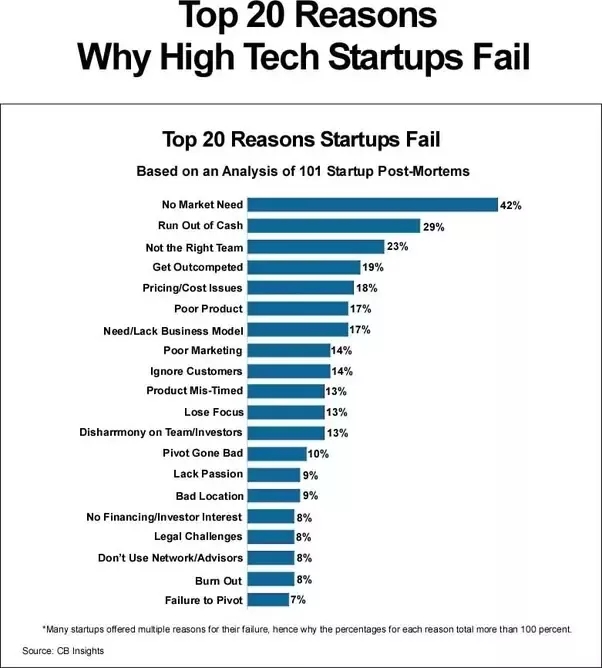 Vision is very powerful because it leads to motivation. If a startup is focused, it has a single-minded sense of certainty and nothing will stop it and no money making opportunity will sway the startup from its path. Actions may be key, but without vision guiding actions, a startup may not achieve its goals because it wont know what truly its goals are. Here is a thread from Quora on  the best list of advice for entrepreneurs to guide them on “How not to fail.”